As we transition from spring to summer, everyone (cow/calf, stocker, feedlot, and dairy producers) must develop a fly control plan for their operation.  Historically, the economic loss from flies alone is approximately $3.5 billion from reductions in animal performance.  Losses can be minimized by using simple management strategies that can help control the fly population.

There are three fly species that are of economic concern to the cattle industry; horn fly, stable fly, and the face fly. 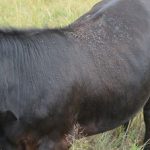 The horn fly is a small, bloodsucking ectoparasite that resides on the back, shoulders, and sides of cattle (Figure 1).  During the hot summer months, horn flies migrate to the belly in an attempt to stay cool.  Horn flies, male and female, feed 20-30 times/day and can live for up to 3 weeks (Tomberlin, 2012). The constant feeding activity combined with increased numbers results in reduced weight gains in calves and stockers, milk production in dairy and mother cows, and feed efficiency in feedlot cattle (Byford et al., 1992; Oyarzún et al., 2008).  Because of the reduction in animal performance, economic losses from horn flies alone have been estimated at nearly $1 billion in the United States (Boxler, 2016).  The economic injury level (i.e. threshold where economic impact begins) for the horn fly is approximately 200 flies/animal or less for beef and dairy (Oyarzún et al., 2008).

The development of the horn fly is highly correlated with increased environmental temperature; ranging from approximately 50-95°F with the optimum between 77-80°F (Geden and Hogsett, 2001).  The life cycle occurs with the female fly leaving the host only to lay her eggs in manure pats and then returning.  Within 1-2 days the eggs will hatch into larvae where they will feed on substrates within the manure for 3-5 days.  The larvae will then transition into pupae for 6-8 days (Lysyk, 1991).  After pupae development, adult flies will emerge from the manure pat and must quickly find a host to consume their first meal. 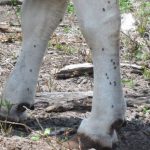 Figure 2: Photograph by Phillip Kaufman adapted from Kaufman and Weeks, 2015.

The stable fly is a bloodsucking ectoparasite that mainly targets the front legs, sides, back, and belly of cattle (Figure 2).  The stable fly consumes only one bloodmeal a day lasting 2-5 minutes and then leaves to rest on surrounding vegetation or buildings which makes this species difficult to manage.  You will know that your cattle have an issue with stable flies as their bites are very painful resulting in defensive behaviors such as foot stomping, head throwing, and tail switching.  In response to a stable fly infestation, the entire herd will bunch in the pasture, stand in an available water source to avoid being bitten, and decrease time bedded down.  Taylor et al., (2012) modeled the economic impact and yield-loss function of stable flies on dairy and beef cattle production.  The authors reported that dairy herds with leg counts in the range of 0-15 flies per leg to expect a loss of 0.5 lb. of milk per cow with each additional fly.  Cow/calf operations could expect to see a 16-37 lb. reduction in calf weaning weight when leg counts were as low as 5-10 flies as a result of stress to the damn and calf over the 90-day grazing period.  Leg counts between 5 and 10 flies per animal in stocker and feedlot cattle could result in an ADG loss of 90-101 lb. and 15-23 lb., respectively, over the 90-day fly period.  The greatest reduction is observed in grazing stocker calves because more energy has to be utilized to combat the stable fly.  The diet that these calves are consuming also factors into the equation of reduced performance.  The nutritive value of the grass declines over the course of the grazing season resulting in less energy available to be partitioned for growth.  Economic losses from reduced animal performance from the stable fly was reported to be $2.21 billion on average from 2005-2009 (Taylor et al., 2012).

Female stable flies rely on damp, decaying organic matter mixed with manure and soil to reproduce.  The life cycle of the stable fly ranges from 12-20 days depending on the environmental conditions.  Stable flies are most prevalent around feedlot and dairy pens where manure or feed can build up.  For example, calf hutches are a prominent hot spot for stable flies as bedding, manure, and moisture can accumulate if not properly maintained leading to the perfect environment for stable fly larvae.  The prevalence of stable flies in pasture settings have increased due to the practice of feeding large round bales to cattle on pasture during the winter months (Broce et al., 2005).  The accumulation of hay and manure waste around the stationary feeders create an excellent breeding ground for stable flies.  Regardless of cleanliness, stable flies have been documented to travel between farms from breeding to feeding sites and vise versa.  Boxler (2016) reported that the stable fly can travel at least 10 miles or more to find a host making it difficult to manage.

The face fly is a non-biting fly that feeds on animal secretions, nectar, and moisture within manure (Boxler, 2016; Figure 3).  The female face fly causes extreme annoyance by clustering around the animal’s eyes, mouth, and muzzle to feed.  The face fly can cause injury to the eye and transmit pathogens such as Moraxella bovis, which is responsible for pinkeye.  Pinkeye can be responsible for reduced weight gain, decreased milk production, devaluation of sale animals due to eye disfigurement, and an increase in medical treatment costs (Stokka et al., 2000).  Data would suggest that an average of 12-14 face flies on an animal will result in a reduction in grazing time (Rolston and Johnson, 2017).  However, because the threat of contracting pinkeye from the face fly is so great the economic injury level for the face fly is 1 (Geden and Hogsett, 2001).  Similar to other fly species, once the annoyance threshold has been reached, the animal will exhibit avoidance behaviors such as frequent head shaking, bunching, and increased time in shaded areas which can impact gains and milk production. It has been estimated that losses associated with pinkeye reached $200 million in the Unites States in the mid-1980s and continue to increase today (Stokka et al., 2000).

Face flies are dependent on fresh cattle manure to reproduce. Similar to other species, the face fly life cycle is completed in 2-3 weeks.  Face fly eggs are laid in fresh cattle manure in open pasture.  Eggs laid in feedlot manure will not survive as that manure has a greater risk of being disturbed.  While the face fly is present throughout the entire summer, the population peaks around July and August (Rolston and Johnson, 2017).

There are many different methods that a producer can utilize to reduce or manage fly numbers.  A wide variety of insecticides can be used to help control fly populations.  Insecticides can be applied as sprays, dust, pour-ons, or within ear tags.  Cattle producers have been utilizing insecticides for generations as they are effective; however, with the invention of the pyrethroid ear tag, insecticide resistance has developed (Geden and Hogsett, 2001).  An alternative to insecticides is the use of insect growth regulators (IGR) such as diflubenzuron.  Diflubenzuron is effective in disrupting the production of chitin, a key component of an insect’s exoskeleton.  With an underdeveloped exoskeleton, the immature fly will not survive.  At the correct concentrations, IGR can be safely mixed into cattle feed, fed to the animal, and contained within the manure to prevent flies from developing and emerging.  However, IGR do not impact adult flies making timing and management decisions essential during fly season.

Here at Double S Liquid Feed Services, Inc. our custom products can contain an IGR product, Clarifly® or Altosid® to prevent horn, stable, and face flies from developing and emerging from the manure of treated cattle.  Clarifly® can be added with our dairy or feedlot products to be mixed into a total mixed ration, whereas Altosid® is combined with our lick tank products for cow/calf and stocker operations.  We understand the severity that flies can have on production and want to make sure that everyone is protected.  Lastly, proper sanitation around winter feeding sites, calf hutches, feeding aprons and bunks, compost piles, and other continuously damp areas will aid in the control of the stable fly population.

Overall, all flies can have a significant impact on the cattle industry by reducing gains, efficiencies, and milk production.  Before peak fly season, a producer needs to have a fly management plan in place to ensure that potential losses are minimized.  There are many options for controlling flies and the best method for a producer is one that best fits with their operation’s system.  Please contact your Double S Liquid Feed Service, Inc. representative to answer any further questions regarding fly control for your herd.

Boxler, D. 2016. Fly control for cattle on pasture in Nebraska. UNL BEEF. Received from https://beef.unl.edu/cattleproduction/controllingflies. Accessed on May 21st, 2018.

Broce, A. B., J. Hogsette, and S. Paisley. 2005. Winter feeding sites of hay in round bales as major developmental sites of Stomoxys calcitrans (Diptera: Muscidae) in pastures in spring and summer. J. Econ. Entomol. 98:2307-2312.